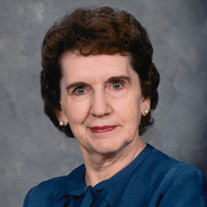 Ruby Marie (Hawkins) Mobley, 98, of Walnut Hill, Illinois, passed away at 10:36 a.m., Wednesday, March 13, 2019, at her granddaughter's home, in St. Peters, Missouri. She was born December 17, 1920, in Walnut Hill, the daughter of Robert Estille and Mabel (Thompson) Hawkins. On December 12, 1936, in Shawnee, Illinois, she married Paul J. Mobley, and he preceded her in death on May 26, 1991. Mrs. Mobley graduated from Walnut Hill Grade School and Centralia High School, and she attended Walnut Hill Missionary Baptist Church. She was a song leader for thirty years, and a secretary and treasurer for twenty-five years. She was also a member of the Ladies Sunshine Center and worked as a sales lady for Sears. She is survived by four grandchildren, Rebecca Stamer of St. Peters, Missouri, Paul L. Mobley, Jr., and wife Tamara of St. Peters, Missouri, Michael Mobley and wife Mel of High Ridge, Missouri, and Matthew Mobley and wife Carla of St. Louis, Missouri; eight great-grandchildren, Jennifer and Nick, Melissa and Gary, Payton, Victoria, Sabrina, and Ethan; and five great-great-granchildren, Brooke, Austin, Kiersten, Braden, and Hayley. She was preceded in death by her husband; parents; one son, Paul Larry Mobley, Sr.; one great-grandson, Chad; and one brother, Melvin Eugene Hawkins. Funeral services for Mrs. Mobley will be held at 1:00 p.m., Monday, March 18, 2019, at the Osborn Funeral Home in Dix, with Rev. Don Bigham officiating. Burial will follow at Zion Grove (County Line) Cemetery. Visitation will be held Monday, March 18, 2019, from 11:00 a.m. until the hour of service. Memorial gifts may be made to the Zion Grove Cemetery, and will be accepted at the service, or by mail to the Osborn Funeral Home, P.O. Box 130, Dix, Illinois 62830. Online condolences may be made at www.osbornfuneral.com, or on the funeral home's Facebook page.

The family of Ruby Marie (Hawkins) Mobley created this Life Tributes page to make it easy to share your memories.

Send flowers to the Mobley family.