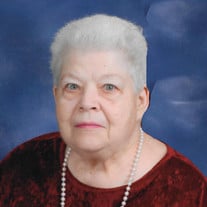 Shirley Louise Brown, 82, of Dix, died at her home, on Saturday, December 21, 2019. She was born December 31, 1936, to Joseph and Norma Bailey, at her Grandma's house in Kings, Illinois, while her mom was at card club. She attended advanced classes at Kings Elementary School, and studied bookkeeping and office skills at Rochelle High School. Shirley worked at Lazier Seed Company during her senior year, and until she married Floyd Brown on February 16, 1956, and began her career of an Air Force wife. They then began traveling the world, having babies and experiencing the culture of Japan, the Philippines, and Turkey. Shirley thrived in every location, enjoying friends, local events, and her family. The Browns were famous for making pizzas in Japan and Turkey, much to the delight of the service families stationed with them. Shirley began working outside the home again in Turkey, in the Finance Office. After Floyd retired, they settled in the Dix area, where Shirley worked at Page Insurance and the First State Bank of Dix, for 19 years. After her own retirement, she renewed her love of reading, knitting, and Television. She also enjoyed cooking, embroidery, music, Jeopardy, solitaire, and correspondence. Shirley was a member of Pleasant Hill Baptist Church, and was very active in the Sunday School program, WMU, prayer chain captain, and various Bible studies. Shirley is survived by her husband of 63 years, Floyd Brown of Dix; one daughter, Sharon Bean and husband Greg of Dix; one son, Timothy Brown and friend Tammy Stoner of Johnsonville; grandchildren, Angie Gorman, Diana Pickett, Daniel Brown, and Josh Brown; eight great-grandchildren; two sisters, Roberta Spitz and husband Richard of East Peoria, and Joanne Budde and husband Lance of Urbana; one brother, Homer Bailey and wife Rebecca of Kings, Illinois; and many nieces and nephews. She was preceded in death by her parents, Joseph and Norma Bailey; one brother, Roger Bailey; and one beloved son, Michael Brown. A Visitation for Mrs. Brown will be held Monday, December 23, 2019, from 5:00 p.m. until 7:00 p.m., at the Osborn Funeral Home in Dix. Following the visitation, and in accordance with her wishes, cremation rites will be accorded, and private burial of her cremains will take place at a later date, at Pleasant Hill Cemetery. In lieu of flowers, memorial gifts may be made to the St. Jude's Hospital, and will be accepted at the visitation, or by mail to the Osborn Funeral Home, PO Box 130, Dix, Illinois 62830. Online condolences may be made at www.osbornfuneral.com, or on the funeral home's Facebook page.

Shirley Louise Brown, 82, of Dix, died at her home, on Saturday, December 21, 2019. She was born December 31, 1936, to Joseph and Norma Bailey, at her Grandma's house in Kings, Illinois, while her mom was at card club. She attended advanced... View Obituary & Service Information

The family of Shirley Louise Brown created this Life Tributes page to make it easy to share your memories.

Send flowers to the Brown family.