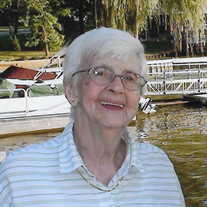 Shirley Vest, 90, made her transition to her heavenly home on Saturday, April 28, 2018. Shirley was born in Xenia on February 29, 1928, the daughter of Raymond and Melissa (Weems) Flicker. She did not discover she was a Leap Year baby until adulthood, as her mother didn't want her little girl to be limited to birthday celebrations every four years. She was a cheerleader at Xenia High School, where she graduated. As a young girl, Shirley gave her life to God and joined the Xenia United Methodist Church. On April 15, 1947, Shirley married Gail Vest, and they lived in the Orchardville area, until the late 1970's, when they moved to Cisne. She lived in Cisne until a serious fall in 2006 resulted in her move to Greentree Assisted Living in Mt. Vernon, where she lived until recently. While there, she enjoyed many activities, including yoga classes, bingo, and many outings and programs. Often described as a “sweet lady”, Shirley was known for her unwavering faith in God and her deep, abiding love for her family. Shirley also had a very “sweet tooth”, with a special affinity for chocolate. She delighted in spending time and visiting with family, especially celebrating holidays and creating special Christmas and Easter family traditions for her daughters as they grew up, and later, for her grandchildren. She maintained interest in her grandchildren’s and great-grandchildren’s lives, and she kept a long card list of birthdays and anniversaries. Through the years, Shirley enjoyed many wonderful times at Lake Bloomington, with her niece Shari Morkin (Don) and their family. As her family deeply mourns the loss of their matriarch, they also celebrate, cherish and appreciate her long and loving life. Shirley is survived by her loving daughters Vickie Vest Keen (Ron) of Tipp City, OH, and DeLinda Youngblood (Randy) of Iuka. Grandchildren include Randa Roddy(Tim Liefer), Zach Youngblood (Kelly), Nate Keen and Alex Keen. Great-grandchildren include Wyatt, Gabe, Hadleigh and Marley. She was preceded in death by her husband, Gail Vest, parents, Raymond and Melissa (Weems) Flicker and her sister, Nina Bryson. Funeral services for Mrs. Vest will be held at 11:00 a.m. Thursday, May 3, 2018, at the Osborn Funeral Home in Dix. Burial will follow at Jacobs Chapel Cemetery in Orchardville. Visitation will be held on Wednesday, May 2, 2018, from 5:00 p.m. to 7:00 p.m., at the funeral home. In lieu of flowers, memorial contributions may be made to the Orchardville Community Center, and will be received at the service, or by mail to the Osborn Funeral Home, P.O. Box 130, Dix, Illinois 62830. Online condolences may be made at www.osbornfuneral.com, or on the funeral home's Facebook page.

Shirley Vest, 90, made her transition to her heavenly home on Saturday, April 28, 2018. Shirley was born in Xenia on February 29, 1928, the daughter of Raymond and Melissa (Weems) Flicker. She did not discover she was a Leap Year baby until... View Obituary & Service Information

The family of Shirley Vest created this Life Tributes page to make it easy to share your memories.

Shirley Vest, 90, made her transition to her heavenly home on...

Send flowers to the Vest family.