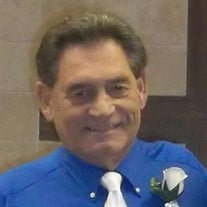 Steven Lloyd Sledge, 65, of Dallas, Ga, passed away on Monday, August 1, 2016, in Dallas, Georgia. He was born on October 1, 1950, in Mt. Vernon, Illinois, to Dee Lloyd and Betty (Tate) Sledge. On September 24, 1998, in Dallas,GA, he married Kimberly Sue Galiher, and she survives in Dallas, GA. In addition to his wife, he is survived by his mother, Betty Sledge of Texico; one daughter, DeAnna Urbanski and husband Steve of Du Bois; one son, Daniel Sledge and fiancée Kathy Abbott of Texico; one step-son, Mark Taylor and wife Valerie of Mt. Vernon; two sisters Nancy Bain and husband Bart of Savannah ,GA, and Laura Weems and husband Johnny of Bolivar, TN; one brother, David Sledge and wife Vicki of Texico; seven grandchildren; five great-grandchildren; his mother-in-law, Betty Galiher of Mt. Vernon; one brother-in-law, Mike Galiher of Mt. Vernon; two sisters-in-law, Vickie Webb and husband Doug of Woodlawn, and Lea Ann Powers and husband Dave of Dallas, GA; and several aunts, uncles, nieces, nephews, and cousins.. He was preceded in death by his father, Dee Lloyd Sledge and his grandparents. Mr. Sledge was a 1968 graduate of Mt. Vernon Township High School. He was a carpenter, millwright, and a member of Illinois Carpenters Local 636. A visitation will be held Saturday, August 6, 2016, at 1:00 p.m., at Pleasant Hill Baptist Church, followed by a memorial service at 2:00 p.m., with Jack Lucas and Stacy Tate officiating. Burial of his cremains will follow at Pleasant Hill Cemetery. Memorials may be made to the American Heart Association, and can be mailed to the Osborn Funeral Home, P.O. Box 130, Dix, IL 62830. Online condolences may be made at www.osbornfuneral.com, or on the funeral home's Facebook page.

The family of Steven Lloyd Sledge created this Life Tributes page to make it easy to share your memories.

Send flowers to the Sledge family.