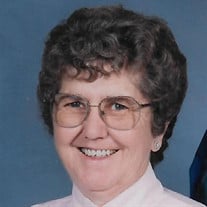 Verlene (Jennings) Ward, 82, of Salem and formerly of Iuka, passed away Monday May 14, 2018 at 10:53 p.m. at Twin Willows Nursing Home in Salem. She was born in Iuka on January 27, 1936 to Clarence and Nora (Velden) Jones. on September 1, 1956 she married Lester Jennings and he preceded her in death on Nov. 17, 1991. She later married Donald Ward and he preceded her on Aug. 21, 2017. Verlene was a member of the New Liberty General Baptist Church. She worked at Brown Shoe Company until the factory closed and then worked at Cambridge in Centralia. She was a member of the United Auto Workers. Verlene is survived by two sons, Dwayne Jennings and wife Chris of Iuka and Ron Jennings and wife Kathy of Iuka, Two grandsons, Dylan Jennings of Iuka and Doug Jennings and wife Renae of Iuka , three great grandchildren, Damon and Devan Jennings both of Iuka and Zoey Jennings of Salem, one sister Evanelle Burroughs of Flora, five sisters in law, Karren Hodge, Sandy Oswald, Rosie Henson all of Iuka, Maxine Read of Salem and Lou Clark of Florida. She is also survived by several Nieces and Nephews. In addition to her husbands she was preceded in death by her parents, two brothers Harlan and Raymond Jones and two sisters Wanda Jones and Charlotte Allison and one Step grandson, Shannon Landreth. Funeral Services will be Saturday May 19, 2018 at 11 a.m. at the Osborn Funeral Home in Dix. Burial will follow at the New Liberty Cemetery in rural Iuka. Visitation will be Friday from 5 to 7 p.m. at the funeral Home. Memorials may be made to the New Liberty Cemetery and will be received at the Osborn Funeral Home or mailed to the funeral home at P.O. Box 130, Dix, IL 62830. Online condolences may be made at www.osbornfuneral.com, or on the funeral home's Facebook page.

The family of Verlene (Jennings) Ward created this Life Tributes page to make it easy to share your memories.

Verlene (Jennings) Ward, 82, of Salem and formerly of Iuka, passed...

Send flowers to the Ward family.