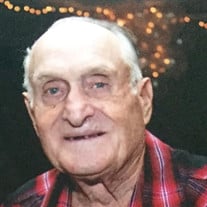 Vern "Gale" Southerd, 79, of Mt. Vernon, went to be with his Lord and Savior at 6:00 p.m., Wednesday, May 25, 2016, at the Marion VA Community Living Center, in Marion. He was born June 9, 1936, in Mt. Vernon, the son of Charles and Agnes (Rote) Southerd. In 1955, he married Zelah Robinson in New Buffalo, Michigan, and she preceded him in death. He later married Betty Meadows in 1978, in Mt. Vernon, and she preceded him in death in 2005. Gale attended Forest Hill School. He served in the United States Army, and worked for Precision National prior to his retirement. He was a member of Logan Street Baptist Church. In his free time, he enjoyed fishing, woodworking, refurbishing tractors, and dancing. He loved spending time with his two daughters, and his grandchildren, who loved hearing his sound advice. He is survived by two daughters, Sharon Thomas and husband Robert of Mt. Vernon, and Carol Riggs and husband Mike of Centralia; one step-son, Billy Beckham and wife Crystal of Mt. Vernon; ten grandchildren, Michael Riggs, Christopher Riggs, Mark Riggs, Cassandra Caldwell and husband Michael, Amanda Matthews and husband Joshua, Charity Garbo and husband James, and Phillip and Cindy Thomas, Alisa Cox, Heather Lincoln, and Blase Beckham; twenty great grandchildren; two brothers, Dale Southerd and wife Judy of Kentucky, and Rev. Bob Southerd and wife Betty of Texico; two sisters, Fern Bullock of McLeansboro, and Nita Bea Tindall of Belvidere, Illinois; many nieces and nephews, and special friend and companion, Suzanne Hayes. He was preceded in death by his parents; his wives; two daughters, Sherry Southerd and Mary Southerd; one son, Gary Southerd; one step-daughter, Sue Cox; three brothers, Edward Southerd, Harlan Southerd, and Charles Southerd; and three sisters, Eleanor Cralley, Mary Spackey, and Dora Colledge. Funeral Services for Mr. Southerd will be held Sunday, May 29, 2016, at 2:00 p.m., at the Osborn Funeral Home in Dix, with Pastor Ron Trotter officiating. Burial will follow at Boyd Cemetery. Visitation will be held Saturday, May 28, 2016, from 5:00 p.m. to 7:00 p.m., at the funeral home. Memorial gifts may be made to the American Cancer Society, or to the Marion VA Community Living Center, and will be accepted at the service, or by mail to the Osborn Funeral Home, P.O. Box 130, Dix, Illinois 62830. Online condolences may be made at www.osbornfuneral.com, or on the funeral home's Facebook page.

The family of Vern "Gale" Southerd created this Life Tributes page to make it easy to share your memories.

Send flowers to the Southerd family.