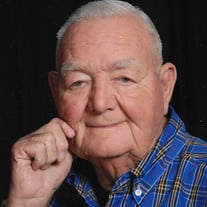 Walter Eugene Heckler, 83, of Walnut Hill, passed away Monday, December 26, 2016, at Centralia Manor. He was born August 11, 1933, in Paris, Illinois, the son of Floyd Wayne and Helen (Mullenix) Heckler. On October 10, 1950, in Marshal, Illinois, he married Hazel Raymer, and she survives. He was a grain elevator manager in Champaign County for many years, and in 1974, he and his wife became house parents for Illini Christian Chlidrens Home, where they served for 30 years. He was a volunteer fireman for Jefferson County Fire Protection District, and, for thirty years, was a bus driver for Rome Grade School. He also served as a Trustee on the Dix Village Board. He was a member of Boyd Christian Church, and served as an elder. In addition to his wife, Hazel Heckler of Walnut Hill; he is survived by two sons, Keith Eugene Heckler and special friend Shelley of Centralia, and Jonathan Matthew Heckler and wife Christina of Johnston City; two daughters, Linda Soard and husband Carl of Villagrove, Illinois, and Connie Jo Ward and husband Dan of Homer, Illinois; four grandchildren, Jessica Ward, Darrel Ward and wife Tammy, Joseph Ward and wife Kathy, and Thomas Ward and wife Ralinda, of Castana, Iowa; eight great grandchildren, Tyler Ward, Daniel Lee Ward, Daniel Dewayne Ward, Elizabeth Getz, Ethan Ward, Brianna Ward, Cheyanne Ward, and Kyle Ward; one brother, Albert Heckler of Joliet; and one sister, Beth Hilqadeik of Indianapolis, Indiana. He was preceded in death by his parents; one daughter, Debra Ann Heckler; and one great grandson, Cameron Ward. Funeral Services for Mr. Heckler will be held 11:00 a.m. Friday, December 30, 2016, at Boyd Christian Church, with Jeff Van Mater officiating. Visitation will be held from 10:00 a.m. until the hour of service on Friday. On Saturday, at 11:00 a.m., a graveside service will be held at Pleasant Ridge Cemetery in Newman, Illinois. Online condolences may be made at www.osbornfuneral.com, or on the funeral home's Facebook page.

The family of Walter Eugene Heckler created this Life Tributes page to make it easy to share your memories.

Send flowers to the Heckler family.