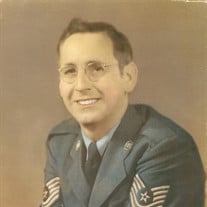 Wesley Burton Miller, 96, passed on to his eternal home at 1:30 p.m., April 27, 2018, at the Bethany Health Care and Rehab Center, in DeKalb, Illinois. He was born May 14, 1921, in rural Opdyke, Illinois, the son of the late Sam and Lula (Veatch) Miller. Burton attended Opdyke High School, where he played basketball, and graduated May 1938. On December 4, 1940, he and his brother Wayne joined the Army Air Corps and were stationed at Wheeler Air Force Base in Hawaii. He was a World War II Veteran, Survivor of the bombing at Pearl Harbor on December 7, 1941, and served in the 106th Infantry Division during the three-week Battle of the Bulge, which began December 16, 1944. After his military service, he attended DePaul University in Chicago. On January 2, 1946, he married Evelyn Berniece Poole, and they shared 72 years together. The majority of their married years were lived in Chicago, Illinois, where he worked as plant manager for a metal finishing plant. After his retirement in 1984, both he and his wife served the elderly and needy for 20 years at Bethel Community Church in Chicago, as well as in their own neighborhood. Their selfless and loving spirit were an example to all. In March 2012, they relocated from Chicago to Sycamore, Illinois. Burton was also a long-time fan of the Chicago Cubs and was overjoyed as he and his grandsons gathered around the TV in 2016 to watch and celebrate the Cub's first World Series win since 1908. Surviving are his loving wife; his son, Bruce (Carolyn) Miller, Sycamore, Illinois, and his daughter Brenna (Dave) Rickert, Dayton, Ohio; eight grandchildren- Keith (Jen) Miller; Nathan Miller; Seth (Becki) Miller; Faith (Duc) Pham; Bethany Miller; Timothy (Amie) Rickert; Michael (Tanya) Rickert and Matthew (Sarah Beth) Rickert. He loved and was devoted to his family, and his 11 great-grandchildren brought much joy and excitement to his life. He was preceded in death by his parents; sisters Irene Williams and Mable Hardin; and brothers Ernest and Wayne Miller. On Saturday, May 5, 2018, visitation will be at noon and funeral services at 1:00 p.m. at Harmony Baptist Church located Northeast of Mt. Vernon, Illinois. Officiating is his son Bruce Miller, pastor of the Wasco Baptist Church, Wasco, Illinois, near Sycamore, Illinois. Graveside military rites will be accorded by American Legion Post #141, of Mt. Vernon, Illinois. A Memorial service will be held May 26, 2018, at 11:00 a.m., at the First Baptist Church, 530 West State Street, Sycamore, Illinois. Osborn Funeral Home in Dix is in charge of arrangements. In lieu of flowers, gifts may be made to the Wasco Baptist Church, PO Box 125, Wasco, Illinois 60183. Online condolences may be made at www.osbornfuneral.com, or on the funeral home's Facebook page.

The family of Wesley Burton Miller created this Life Tributes page to make it easy to share your memories.

Send flowers to the Miller family.