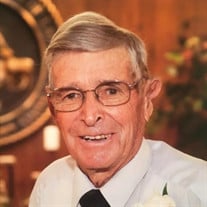 Wilbert A. "Wib" Pierce, 90, of Mt. Vernon passed away Sunday, January 15, 2017, at his home. He was born in Farrington Township on December 9, 1926, the son of Parker and Nellie (Donoho) Pierce. Wib graduated from Mt. Vernon Township High School in 1944, and straightway served in the United States Army from 1945-1947, with the 1st F.A. Battalion, stationed in Korea. Wilbert and Darlene (DeSelms) Pierce were married on August 29, 1952. They established their home in rural Jefferson County, Rome Township, where they remained lifelong residents. Wib was employed by Mt. Vernon Furnace Manufacturing Company (Stove Foundry) in general production for 21 years. He was employed by Precision National Cooperation in Locomotive Crankshaft rebuild for 22 years. In addition, he farmed as a sideline. Mr. Pierce is survived by a son, Kevin Pierce and wife Shelli of Mt. Vernon; two grandchildren, Megan Hargett and husband Tony of Marion, and Ganon Pierce of Seattle Washington; one great grandchild, Corin Hargett of Marion; a brother, Calvin Pierce and wife Rena of Mt. Vernon; a sister, Wilma Campbell of Mt. Vernon; and several nieces and nephews. In addition to his wife, he was preceded in death by his parents and a sister, Ghnell Pickett. Funeral services will be Saturday, January 21, 2017, at 11 a.m., at the Osborn Funeral Home in Dix with Elder Rick Forth and Elder Larry Woodrow officiating. Burial will follow at Mt. Vernon Memorial Gardens Cemetery. Friends may call from 5 to 8 p.m. on Friday at the funeral home. Memorials may be made to Outreach International and will be received at the Osborn Funeral Home, P.O. Box 130, Dix, IL 62830. Online condolences may be made at www.osbornfuneral.com, or on the funeral home's Facebook page. Throughout his life, Wib strived to be a follower of Jesus Christ. Many thanks to all for your concerns, prayers, and expressions of kindness extended to the family.

Wilbert A. "Wib" Pierce, 90, of Mt. Vernon passed away Sunday, January 15, 2017, at his home. He was born in Farrington Township on December 9, 1926, the son of Parker and Nellie (Donoho) Pierce. Wib graduated from Mt. Vernon Township High... View Obituary & Service Information

The family of Wilbert A. "Wib" Pierce created this Life Tributes page to make it easy to share your memories.