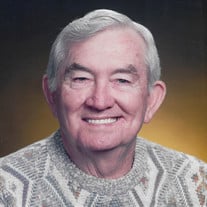 William A. Smith, 84, of Dix, passed away at 4:00 a.m. Saturday, April 21, 2018, at his home. He was born March 12, 1934, in Mt. Vernon, the son of Charles Andrew and Nora Mae (Bullock) Smith. On June 29, 1951, in Mt. Vernon, he married Mary Ann Mathus, and she survives. He was a member of New Hope (Webb) Missionary Baptist Church, and graduated from Mt. Vernon Township High School. In addition to his wife, Mary Ann Smith of Dix, he is survived by five sons, Bill Smith and wife Diane of Dix, Rick Smith of Mt. Vernon, Larry Smith of Dix, Terry Smith and special friend Kimberly Lane, and Mike Smith and wife Cathy of Murray, Kentucky; one daughter, Pam McBride and husband Jim of Mt. Zion, Illinois; seventeen grandchildren; thirteen great-grandchildren; and two great-great-grandchildren. He was preceded in death by his parents; one son, Jim Smith; one great-grandson, Liam Smith; four brothers; and one sister. Funeral Services for Mr. Smith will be held at 11:00 a.m. Tuesday, April 24, 2018, at Osborn Funeral Home in Dix. Burial will follow at Old Donoho Cemetery. Visitation will be held Tuesday, April 24, 2018, from 10:00 a.m. to 11:00 a.m., at the funeral home. Memorials may be made to the Old Donoho Cemetery, and will be accepted at the service, or by mail to the Osborn Funeral Home, P.O. Box 130. Dix, Illinois 62830. Online condolences may be made at www.osbornfuneral.com, or on the funeral home's Facebook page.

The family of William A. Smith created this Life Tributes page to make it easy to share your memories.

Send flowers to the Smith family.